ST. PETERSBURG — Leslie Johnson grew up in what she deemed a poor situation in the James Park neighborhood. However, after hearing the words of poet Maya Angelou, she was reassured with a mindset that spoke riches and prosperity.

Her mother, Danielle Caphart, worked hard in the healthcare field to raise six children­–three boys and three girls. As the fourth child, Leslie bore the responsibility of caring for the younger siblings when her mother was at work. There were many lessons learned from the situation.

“Life taught me that it’s important to be a part of your children’s lives,” said Johnson. “You must bend the tree when it’s young so it will grow in the direction that you wish.”

Her mother taught her to want better for herself and to help others, and today Johnson strives to live out those life lessons. Perhaps the most valuable lesson learned, however, was the importance of education.

The early years at Woodlawn elementary school was challenging. Johnson seemed to be behind other students in the first and second grade. Unexplainably, the words she saw in a book looked different from how the other kids read it. She was frustrated and cried many days. The embarrassment of being “dumb” provoked her to fight as a defense mechanism.

Then along came her third-grade teacher, Deborah Linguanti, who saw what was inside of Johnson and endeavored to bring it out. She discovered that Johnson’s educational challenge was a learning disability that had gone undiagnosed. Johnson was eventually told that she was dyslexic.

“Mrs. Linguanti broke down the walls that were built up in me. I was angry, hurt and felt misunderstood,” said Johnson, as she fought back tears. “She touched that spot that opened me up to trust her. She showed love and patience and encouraged me to try and she did it without ridicule. She gave me the gift of words and her love gave me conviction. I wanted to be a better student because I wanted to please my teacher and for the very first time, I took class seriously. She made me believe that I could learn.”

In the fourth grade, Johnson transferred to Campbell Park Elementary to attend their dyslexia program. This meant leaving a teacher who opened up a new world to her. It also meant that she would be the only child from her neighborhood to attend another school.

The anger set back in and she became rebellious to the change. Then entered Mary Murph, a counselor at Campbell Park who played an important role in Johnson’s transitional period.  Johnson said Murph saved her life as a liaison to the teachers, her mom and the school administrators. She just knew how to handle situations.

“Mrs. Murph encouraged me to write. I was doing better in reading, but she told me I had a gift in writing,” said Johnson.  “I began to write poetry and she loved to read my poems. I was excited that she took the time and I began to write more. It’s something I still use today to express my feelings and to get a message across to others.”

With Johnson having a mentor at school, she still came home to an impoverished neighborhood in James Park; however, the manager of the apartment complex she lived in, Deborah Lyons, took an interest in the residents, especially the children. Lyons implemented a 4H Club where young people are taught skills such as leadership and resiliency.

Through Lyons and the 4-H club, Leslie learned to cook and take care of the house. Her pride and joy is the first time she cooked pancakes. With excitement, she claims it was so cool.

Approximately a year after Leslie joined 4-H, her mother’s hard work paid off and the family moved into a new home on 62nd Avenue South. By now, Johnson was attending Bay Point Middle School and met Pennye Thornton, the school nurse who happened to also be a neighbor.

“I first met Mrs. Thornton at school because I had to have an eye exam. I didn’t want to so I didn’t cooperate,” said Johnson.  “Later that day, she called me back to her office. She told me God sent her to help me and she was going to be in my life for a long time.”

Johnson laughed to herself and thought Thornton was crazy. Then, she showed up at school the next week and checked on her in her classes.  “I knew she was serious.”

To this day nothing has changed. Thornton is still in Johnson’s life and is considered her second mother. She even inspired her to join the army and follow in her footsteps.

“Throughout my life, God has always placed people right on time who loved, guided me and supported me to be the woman, veteran and mother I am today,” said Johnson. “No matter what adversity I face, I will still continue to do the right thing. When I am helping other people then I am also helping myself. That’s how we can heal as a nation.”

Growing up in a poor neighborhood did not dictate Johnson’s future. Meeting the right people helped to shape her mindset that spoke riches and prosperity. It really took a village to raise this child.

You may write me
down in history
With your bitter,
twisted lies,
You may trod me in
the very dirt
But still, like dust,
I’ll rise.
Excerpt from Maya
Angelou’s ‘Still I Rise’ 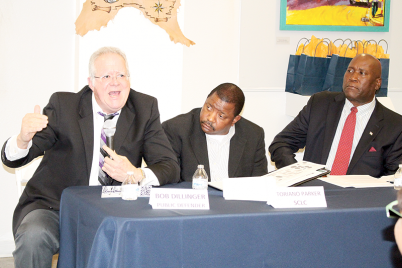 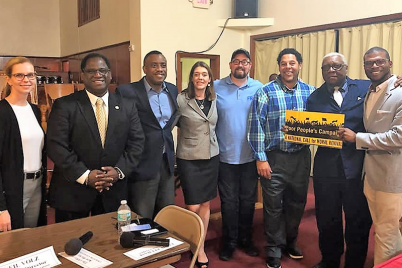 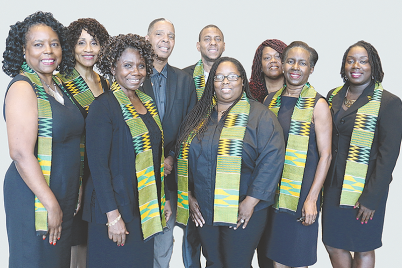