Angela and Darryl Rouson accepting the Lifetime Achievement Award with their family at the 2015 Men & Women of Distinction Awards.

ST. PETERSBURG – Speaking to the ladies of the St. Petersburg Metropolitan Section of the National Council of Negro Women, Inc., Angela Rouson said being married to an elected official has its ups and downs.

“Some people just see it as something their spouse is doing,” she said. “It can be a blessing or a curse. It’s all in how you look at it.”

As the wife of Senator Darryl Rouson for nearly 19 years, she enjoys the opportunity to help promote and support causes that are important to her. However, there are the times that his responsibilities mean he’s away from the family and is not at home to bounce ideas off of, help with managing the household and their blended family.

“I tend to be more of the disciplinarian,” she said. “And I liked to bounce things off of him with the kids because I know I could be pretty strict.”

And although the world of politics wasn’t new to her-she grew up with a father who worked as a lobbyist—marrying someone in politics has proven to be different in many ways.

As Rouson worked through figuring out how she would determine what her role would look like, she decided to use two former first ladies as role models: Eleanor Roosevelt and Michelle Obama. 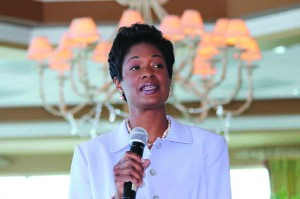 And like a first lady, Rouson said there is no manual on being a politician’s wife. For her, she learned that the role would require her to wear many hats.

“Sometimes I have to be the cheerleader-in-chief and his biggest fan,” she said.

One particular race was extremely close, and she wanted her husband to know that his ability to make a difference isn’t just based on whether or not he wins a political race.

“I wanted him to know that he had done great things for the community already and that he could continue to do so even if he wasn’t elected,” she said.

Rouson said helping her husband reach his goals has also meant putting her career on the back burner to take the lead in raising their children and managing the household.

At first, she had a job she loved in marketing but realized she needed to spend more time with her children while her husband began his political career.

“I was able to be there when the children got home, attend their field trips with them and have time during the day to accompany Darryl to campaign events,” she said.

More than anything, her life as the wife of an elected official has taught her that balance is key.

“There has to be give and take,” she stated. “You both have to make sure that you have the chance to do things that are important to you.”

If she could give advice to anyone embarking on this journey, it would be to make sure to remember to take time for themselves if they want to help their spouse.

“You won’t be good for anyone if you don’t take care of yourself.”

She also would caution them that the job comes with a lot of scrutiny.

“People aren’t judging you based on a speech you gave or a policy you passed, they are judging you purely on what they are seeing,” she averred. “It’s unfortunate and unfair, but it is the reality. It’s a challenge that you have to be willing to face. You have to be confident enough in who and whose you are to let it roll off like water off a duck’s back.”

What is most important, she said, is remembering your quality of life and making the decisions that are best for you, no matter what others may think. Being successful in this role means embracing it and finding your way.

“Success is really all about the journey.” 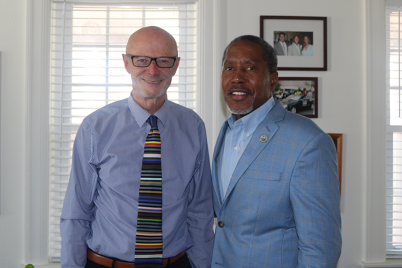 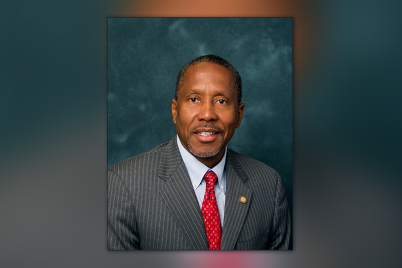 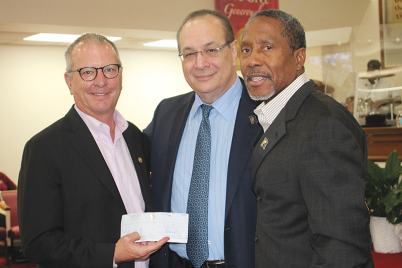 L-R, Mt. Zion Human Services Chairman of the Board Tom Hochhausler accepting a check from…