Council Chair Lisa Wheeler-Bowman supports the removal of SPHA Board of Commissioners over the displacement of seniors and disabled residents of Jordan Park’s Historic Senior Village. Seen here praying with community members for a resolution after the press conference she held Friday, July 20 at the Woodson Museum.

ST. PETERSBURG – “Your success is a benefit to our city’s people, and a key component to our city’s housing goals,” said Deputy Mayor Dr. Kanika Tomalin last Friday at a press conference held at the Carter G. Woodson African American History Museum. “In fact, we cannot do it without the housing authority. But if you are not up to the task, we are able to do it without you.”

Tomalin’s stern warning to the St. Petersburg Housing Authority (SPHA) comes on the heels of Jordan Park residents being displaced into substandard housing, discrediting the legacy of one of St. Petersburg’s founding fathers and the attempt to tear down history without cause. 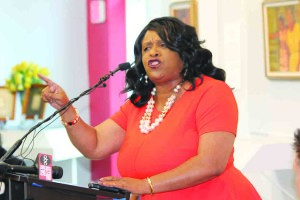 Former Jordan Park resident and School Board member Rene Flowers set the room on fire! She spoke of her grandmother who sold flips, how she would keep sick children home from school at her apartment so that their parents wouldn’t miss a day of work and how she and others ran the Meals on Wheels program out of the old rental office, which is now the Woodson Museum.

“So, I’m not standing here today as someone who is not from this community and doesn’t know the rich history and the legacy of why we have this housing back here, I’m standing here as somebody who grew up in this housing, who was able to take advantage of the historical perspective and the elders in my community,” Flowers said.

“How dare you attempt to taint the name of Elder Jordan, an African-American man who was born into slavery, moved here, became a businessman, provided 26 acres to the City of St. Petersburg…”

At a workshop held July 16, Love said Elder Jordan did not, in fact, donate the land to the city, and produced incomplete county records showing that the land came from a cadre of sources, one of which was his son, Basha Jordan Sr.

City Council rejected a request from the SPHA for a letter the agency said would help move ahead with a more than $40 million rehab process.

Flowers called for SPHA board to remove Love for dereliction of duty on the grounds of displacing seniors and not providing affordable, clean, safe housing and for providing false information to the board by which they made decisions.

She also called for an independent inspector to go back into the units and “fix the things that are wrong in those units and bring our seniors and our disabled people home.” 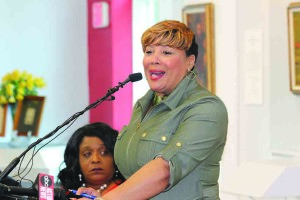 Terri Lipsey Scott, executive director of the Woodson Museum, recounted a few of the treasonous action the SPHA have committed over the decades. She mentioned the Laurel Park Housing Project that was mismanaged until it had to be demolished in the 1980s.

In 2003, SPHA sold the Graham-Rogall public housing complex, which they claimed would be too expensive to rehab and displaced more than 238 seniors and disabled residents. That same building is now apartments geared toward millennials.

And of course, how they have currently deemed the Historic Senior Village uninhabitable and moved its residents out into deplorable conditions only to not have the funds to proceed with their plans.

“So my question is, how much longer do we allow a housing agency to be responsible for the care of our most vulnerable citizens…,” she asked.

The deputy mayor said a person’s need of assistance in no way forfeits their right, expectations or their privilege of respectful interactions with those providing that assistance.

“Dignity must never be a price paid for help,” said Tomalin.

Emphasizing the need for affordable housing, she said City Hall believes a highly functional housing authority can help provide for the community.

“We need those charged with providing for the vulnerable to use their strengths to build up those they serve,” Tomalin said, adding that while some residents are looking forward to change in the senior village, too many feel victimized by the process.

The SPHA is an autonomous entity. Its executive leadership team is not hired or fired by the mayor, but he does have the authority to appoint board members.

Wheeler-Bowman, who represents Jordan Park in District 7, said residents deserve commissioners that are not afraid to lead and who will challenge Love or and any other CEO. She said she will be announcing a public meeting soon with the housing authority board so the public can have a voice.

“We don’t need Tony Love; see because the board runs the CEO. They give him direction,” she said, adding that she demands Congressman Charlie Crist (D-St. Petersburg) write a letter to Department of Housing and Urban Development Secretary Ben Carson about the community’s concerns and request intervention.

Later that date, Crist released the formal letter he sent to Carson about community concerns over redevelopment plans for Jordan Park and their impact on senior residents. He also invited him to visit the community to better understand the situation.

Not mincing words, Wheeler-Bowman said she will be speaking with Mayor Rick Kriseman to review whether any or all of the SPHA commissioners should be removed from office due to inefficiency, neglect of duty or misconduct.

“I feel ready to support the mayor’s removal of commissioners, and appoint a board who will prioritize quality of life for the residents of Jordan Park and all of St. Pete Housing properties,” she averred. 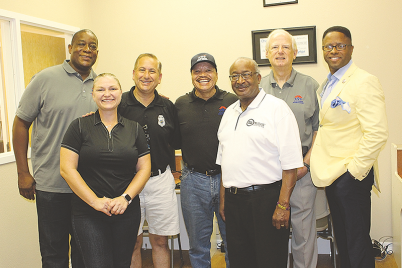