ST. PETERSBURG – The 2018 MLK Day closure of Dr. Martin Luther King Jr. Street from Fifth Avenue to 22nd Avenue South and surrounding areas by the City of St. Pete left residents up in arms at what many called a “police occupation” that shut down the community on a day of a celebration.

Soon after, the NAACP called for a debriefing at the Enoch Davis Center. The organization’s president, Maria L. Scruggs, said city leaders needed to acknowledge “that we have a problem here with the racial, social and economic injustices that impact African-American communities.”

A committee was formed by the NAACP to review the issue, with community leaders determined to press the city to make changes in their policies regarding the MLK Day celebration.

Jabaar Edmond, a vocal advocate for south St. Pete and an organizer for Service Employees International Union Florida, spoke passionately about the need for the city to re-envision the black community of St. Pete as an influential economic stakeholder rather than neighborhood nuisances. 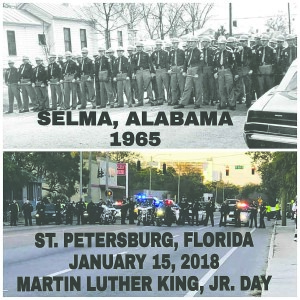 “We expressed a vision to transform the MLK Day celebration into an Essence Festival-type celebration,” Edmond stated.

“Throughout the meetings we heard several times there hadn’t been anyone to come in and talk about the MLK Day celebration on Ninth Street as an economic driver,” asserted Edmond. Rather, the committee heard that City Hall only saw the Dr. Martin Luther King Jr. Street activities as a nuisance abatement problem.

Edmond said they had to explain to city council the history of the Dr. Martin Luther King Jr. Street celebration as a vital marker for the parade’s origins.

“The Ninth Street event is actually the longest running MLK celebration in the City of St. Pete. It actually started as the parade, and when the parade went to Central, the community stayed on MLK Street.”

He believes that the city is allowing outdated city codes, decades of racist stereotypes and accusations of criminal activity and “debauchery” to smother the economic development the celebration brings to the area.

The NAACP-formed committee was able to review crime reports from research giant LexisNexis and found that crime stats for the MLK celebration were the same as crime stats for any other city event.

“When the media reports about the MLK Ninth Street celebration, people sometimes see it negatively because of all the negative reports,” remarked Edmond.  “But when you Google their events, you don’t see the same negative connotation.”

“We can change that because that was intentional,” he insisted, placing the blame on “Jim Crow era” thinking that has persisted. “As stewards of this city, we have to be intentional about breaking [that mindset].”

Edmond pointed to the many “micro businesses” that took a disastrous hit to their wallets last year due to the city’s “martial law” practices. A 2018 article on ABC Action News quoted the assertion made by Black Power 96.3 that the parade brought in up to “50 percent of the revenue for many of these black vendors for the year.”

Last year, the St. Pete Police aggressively went after vendors who were selling without a license, stating health and public safety concerns.

This year, Police Chief Anthony Holloway shared the department’s plans after meeting with the community leaders.

“We looked at our plan and had a conversation about what we could do differently. We came up with some modifications that both sides think are OK to work with.”

Holloway said plans entail returning to what they “normally do on Ninth Street,” including having officers on every block during the event, and when the event is over, monitoring major intersections to regulate traffic flow through the community.

Another change is how vending will be handled.  This year, Holloway said, vendors and property owners can work out their own deals so vendors can sell their wares on private property.

Holloway said another change will be the tape used by the police department to mark off the route. Rather than using yellow crime scene tape, he said they will use special blue and white event tape at all city events moving forward.

The chief of police said he is sending Scruggs a final draft of the police departments plans, had spoken to Edmond and that he will be in touch with the community’s pastors.

Edmond encourages those who are interested in learning more to attend the community conversation scheduled for this Friday, Jan. 11 at 6 p.m. at Moondust Coffee, 2321 Dr. Martin Luther King Jr. St. 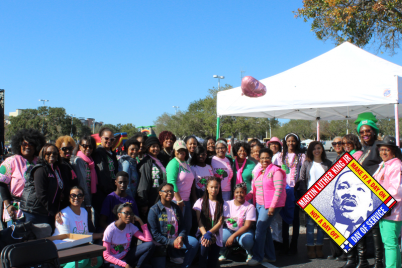 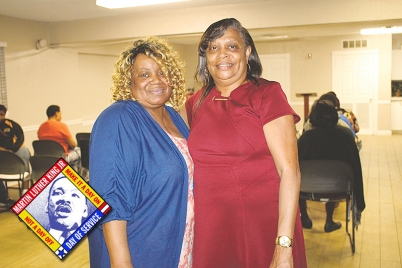 Youths taking charge and giving back 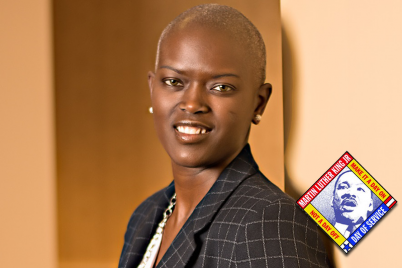