Congressman Crist held a press conference Tuesday calling on state leaders to follow the will of Florida voters on restoring the right to vote for more than 1 million returned citizens who have completed their sentences.

ST. PETERSBURG — Congressman Charlie Crist, Mayor Rick Kriseman and other community leaders addressed the public from the steps of City Hall Jan. 8 to celebrate the implementation of Amendment 4, a recently passed amendment that restores the right to vote to former felons.

Ex-offenders and members of organizations including the ACLU, SEIU, Pinellas County Urban League, League of Women Voters and the Pinellas County Ex-Offender Re-Entry Coalition were on hand as Crist called it a historic morning. The former governor of Florida noted that this past Nov. nearly 65 percent of Floridians voted in favor of passing Amendment. 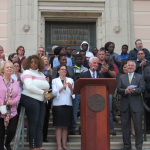 “After more than a century of disenfranchisement under a shameful Jim Crow-era policy,” Crist said, “almost two million of our friends, family and neighbors will finally have their rights restored and the ability to vote.”

Florida was estimated to have 1,686,318 persons–10.43 percent of the voting age population–disenfranchised due to felonies.

Crist said that he was heartened to know that the work he did as governor, which granted clemency to more than 155,000 non-violent felons, will once again be taken up. He added that is it time to end this “dark chapter of Florida history and discrimination once and for all.” Crist made it clear: this is about forgiveness and second chances for all of us.

With the passage of this constitutional amendment, nothing–including any Florida statute or executive action–should keep convicted former felons who have paid their debt to society from legally registering to vote, he explained.

Mayor Kriseman said that this new law has the potential to affect Florida politics forever in a positive way.

“The more people who vote,” he said, “the better off we are. But more importantly, it will impact the lives of people who have paid their debt to society and are ready to take part in our democracy.”

Kriseman warned, however, that this fight doesn’t end at the ballot box, and it is time that state leaders and state legislature accepted the will of the voters “without fighting or trying to prevent implementation” of the wishes of the voting public.

Rev. Louis Murphy, senior pastor of Mt. Zion Progressive Missionary Baptist Church called it a “momentous moment,” and added that we need to continue to vote for laws that will bring positive changes.

“I’m thankful for this opportunity, for all of us to continue to fight the good fight of faith,” he said.

Greg Foster, a former felon, explained that though he had made some poor decisions in his past and subsequently paid his debt to society, he had felt that he still wasn’t viewed the same way as everyone else. In turn, he started to look at himself as “less than.”

“With this amendment being passed, it opens the door for all of us,” he said. “It gives us a voice again; it shows us that we are not less than anymore.”

Following the press conference, participants crossed the street to the Supervisor of Elections office where newly eligible former felons registered to vote.

Who is eligible to vote?

Amendment 4 was designed to automatically restore the right to vote for people with prior felony convictions, except those convicted of murder or a felony sexual offense, upon completion of their sentences, including prison, parole, probation, and any felon who is a citizen, not judged mentally incapacitated. 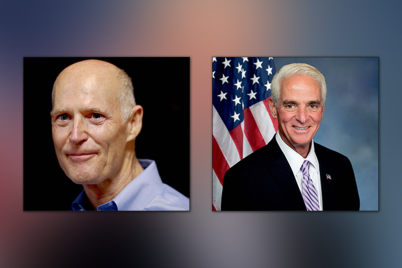 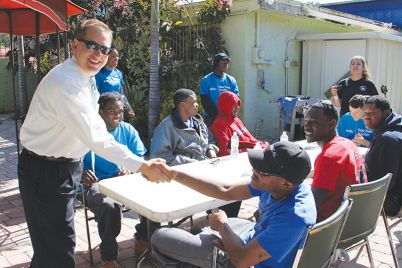 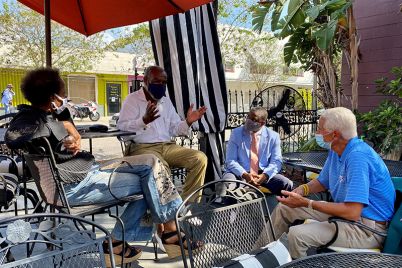