Rev. Dr. William Sherman, pastor of Mt. Carmel Baptist Church, speaks at the memorial for Maurice Mickens, a deacon at Mt. Carmel for 28 years, a playwright, arts enthusiast, and community activist who was well-loved by his family and many.

CLEARWATER — On Jan. 8 at St. John’s Missionary Baptist Church in Clearwater’s Greenwood neighborhood, family, friends and neighbors spoke of the imprint 78-year-old Maurice Mickens has left on Clearwater and his hometown of New York.

Patricia Mickens, Maurice’s devoted wife, said, “Maurice was true to himself, his Christian beliefs and all that he stood for. I learned many things from him, but this stands out: ‘You have to be true to what makes you a person.’”

Those who spoke at the service knew for themselves the truth of who Mickens was.

Simone Lopez, Mickens’ daughter, delivered a beautiful poem in honor of her father and his steadfast support of her.

Rodney Mickens, his son, said friends from the Bronx reached out to him when they heard of his father’s passing. They reminisced on the many positive things Maurice taught them at the Inter Cultural Workshop, an organization he co-founded and ran from 1969 to 1972. 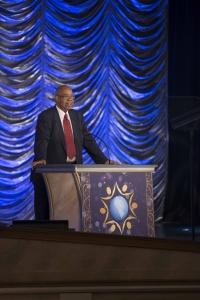 Maurice Mickens spoke at the Charity Coalition Banquet at the Fort Harrison auditorium back in Oct. 2016.

“It was our mutual love of the arts and aesthetics that brought us together,” said Pat Harney of the Church of Scientology and the Dr. Martin Luther King Jr. Center Coalition. “And it was our shared goal of improving our community that kept us working together.”

Mickens founded the Harlem Nights Benefits Productions, several of which he co-hosted at the Church of Scientology’s Fort Harrison retreat in downtown Clearwater and was a frequent honored guest of the community events held there.

Born at the tail end of the Harlem Renaissance and living three blocks from Harlem’s Apollo Theater instilled in Mickens the idea that the arts are the lifeblood of any culture, Harney remembered him saying.

Mickens was also a family man with a large tribe spanning the country. But despite this, he still reached out and adopted more. Rev. Dr. Wendell Miller said, “You have no idea what it means to a man who didn’t know his biological father until I was an adult,” referring to Mickens’ claim of Miller as his son.

“When he walked into a room, people got happier. He was a light and salt of the earth,” said Rev. Dr. Fred Hinson.

“He was my mentor,” said Deacon Joshua Sherman. “He took me to places I never knew existed.”

As the choir closed out the service with the rollicking “Freedom” gospel song, Rev. Dr. William Sherman, Mickens’ pastor for the past 28 years, remembered a refrain Mickens relayed time and time again, “The spirit is good, so the body has to follow.”