PETERSBURG ― Shala Joslin was everything a parent doesn’t want a child to be. That’s how she described herself.

Her bad behavior and attitude was the end of her time at Lakewood High School. That and the fight that left her opponent with stitches across her forehead and under one eye. She was expelled, and the school district threatened to bar her from all public schools.

Despite Joslin’s claim, her mother wasn’t ready to give up on her and found a place where her daughter could get a second chance. She enrolled at 16.

Located at 840 Third Ave. S, MycroSchool Pinellas is the answer for many at-risk students. Because of the relationships built between teachers and students, the small class size (12-15 students), flexible scheduling, and a high-tech, computer-based, self-guided learning experience, kids who couldn’t make it in traditional high school have a second chance to graduate.

Her anger issues appeared to be under control, as Joslin, now 21, spoke. She was calm and confident as she talked about her life, her son and her plans for the future.

The shorter school day helped to mellow Joslin. That and the ability to move at her own pace.

“I’m more of a teach myself kind of person,” she said. “Time management was easier for me here.”

A public, charter, drop-out recovery program, MycroSchool has been part of the Pinellas County system since 2012.

The curriculum is 100 percent in-line with Florida state standards, and students must meet exit requirements to earn a diploma.

MycroSchool is open-entry, open-exit, which means they accept ALL students at any time throughout the school year. Students who have already dropped-out, as well as those who are “released” from their home school mid-year because they are too far behind to graduate, are welcome at MycroSchool.

Full-Time Equivalency numbers of students are calculated in late Sept. These numbers are the basis for state funding. Because the money is allocated at the start of the school year and enrollment at MycroSchool tends to climb as the year progresses, they often find themselves facing a deficit.

Critics of the program have suggested that refusing to admit students late in the year would alleviate extra fundraising efforts; however, that is not consistent with the school’s mission to serve all students regardless of when they enroll or whether they can meet a graduation deadline.

Jorvariz Bartee, 20, is one of those students. He has been at MycroSchool for the past two years, ever since he heard about it at a meeting for students who were getting “kicked out” of their high schools because they were too far behind to graduate on time.

Bartee was in the Gibbs High School auditorium that day because he skipped a lot of school during his time at Lakewood. So much that he hadn’t earned enough credits to graduate with the rest of his class.

Sitting there listening to the speaker layout his options, he decided to give MycroSchool a try.

“I felt like this was my last shot to graduate,” he said.

The gamble paid off – he only has two more classes to go until he earns his diploma.

The setting and the teachers made the difference for him. “This works better for me because I can pace myself,” Bartee said.

He can take as much time as he needs for each lesson. When he feels ready, he takes the test. If he needs help, the teachers are there for him.

Not all students come to MycroSchool behind in credits. Some, like Jayla Dixon, 18, valedictorian of this year’s graduating class, came for the opportunity to work at their own pace.

Dixon always did well in school and got pretty good grades, but after moving back to St. Petersburg from Chicago when her mother suffered a stroke, she began to lose focus. Her grandmother suggested MycroSchool. She liked the idea of working at her own pace.

“Working at my own pace helped me,” Dixon said. “I knew I could hurry up and finish and get on with the real life.”

Another advantage for Dixon was the way the teacher’s formatted the lessons to each student’s learning style. That gave her the opportunity to form relationships with her teachers.

“I connected with my teachers more here,” she said.

Christopher Wolf has been the Exceptional Student Education teacher at MycroSchool for three years. Born in Philadelphia and transplanted to St. Petersburg 20 years ago, he earned his degree in special education from the University of South Florida. He has spent the last 15 years teaching special education from elementary to college level.

Wolf said he knows what it’s like to have a learning difference. He has many. He knows from experience not everyone processes information in the same way. Fortunately for him, his mother recognized his differences early on and was able to enroll him in a program that helped him overcome them.

Most of the students in Wolf’s classes have not been as fortunate. “Imagine finding yourself in ninth, 10th, or 11th grade English with a third-grade reading level,” he said. “It’s a wonder these kids have made it this far.”

Those kinds of deficiencies can be demoralizing for students. Add to that the harsh reality that many of their families don’t value education and you have a recipe for trouble.

“These kids have been pushed aside for a long time,” Wolf said. “A lot of them get to the point they just don’t want to do it anymore.”

Because of what these kids have been through, many arrive at MycroSchool resistant, oppositional and defiant. “That is a huge hurdle to overcome,” said Wolf.

According to Wolf, all the teachers at MycroSchool are committed to helping their students rebuild the self-esteem that in many cases has been destroyed. They take the time to connect with them at a deeper level; to build a genuine rapport; to help recondition their thinking to see that not only can they graduate, they can also be successful.

Wolf has found a home at MycroSchool. Despite what most educators would consider a challenging student population, he said he feels this is the most fulfilling thing he has done in his career.

Helping students to see their strengths, their talents, and that they can do and be more is what makes the staff show up every day.

“Being a part of the kids discovering that they have options” is the best part of the job according to Wolf.

He is more than a teacher to his students; he is their mentor. He talks about the times he has gone to court for his students and how many have his cell number.

Wolf said the unique relationships these students have with the teachers and staff is what keeps them in school when so many other things are pulling them away. Many students work late at fast food restaurants, get up after a few hours of sleep and come to the early session because they have to be back at work in the afternoon. For some, just finding a place to sleep at night is a challenge, not to mention the less than reliable city buses they must take to get to school every morning.

It was the catalyst for Bartee. Not only do the teachers give him more help than he was able to get at Lakewood, but they also take the time to get to know him. And he gets to know them. He feels that allows them to “adapt to each other.” For him, it’s all about relationship.

Relationship was the biggest reason Joslin was able to graduate in June fourth in her class. The communication she developed with the staff was the key to her success.

“They all really want you to succeed, to be someone,” she said. If that meant working around Joslin’s work schedule, making sure she had something to eat or even helping with daycare, the staff was there for her.

Especially Faune Walker, the school’s administrative services/Title I coordinator. When Joslin’s temper would get the best of her, Walker would bring her into her office. She taught her things like how to write a business letter or make a resume.

But she did more than that. Walker helped her with clothes, bills, and the baby. “She was someone to lean on,” Joslin said. “Like a second mom.”

Walker is the air traffic controller at MycroSchool. She greets visitors, answers phones, and takes care of all the administrative tasks involved with running a school. She also helps with fundraising and grant writing.

More than any of that, she is perhaps the school and its student’s biggest cheerleader. She believes in the mission of MycroSchool and the relationships with students and their families it makes possible.

The passion is evident in her voice as she explains that MycroSchool takes students already deemed “at risk,” maybe already dropped out, and offers them a second chance.

The caring and commitment don’t end with graduation. Walker is still a part of Joslin’s life and sees her on a regular basis. “The staff here is going to make sure you stay straight after you graduate,” Joslin said.

Dixon will be attending St. Petersburg College (SPC) next semester. After earning a master’s degree in business, she plans on starting her own company designing and customizing shoes and clothing.

“I wish I wouldn’t have skipped so much,” Bartee said. “I wish I could go back and fix the mistakes I made, but I can’t.”

But with only a few more classes to go, he is on the right track. A track he hopes will take him to culinary school.

Joslin was majoring in biology at SPC with plans on becoming a doctor when another challenge reared its head. She, her son and boyfriend were evicted from the home they were co-sharing with two other young families.

She was unable to continue with her classes at SPC due to the upheaval and stress. Joslin is now working in a restaurant and hopes to return to school in Jan.

“Unfortunately, this is the real-life challenges that face so many of our students and graduates here and throughout the community,” said Walker, adding that Joslin was paying her portion of the rent to the couple listed on the lease, but the couple failed to pay the landlord.

Joslin is currently living with relatives. If you have or know of anyone who has a reasonably priced place to rent, please contact Walker at Faune.Walker@mycroschool.org.

Cindy Swisher is a student reporter in the Neighborhood News Bureau of the University of South Florida St. Petersburg. Visit nnbnews.com for more info. 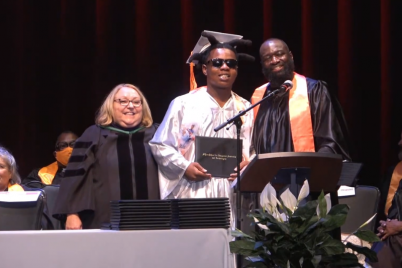 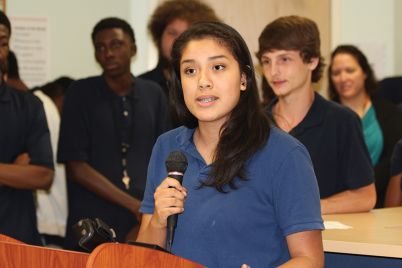 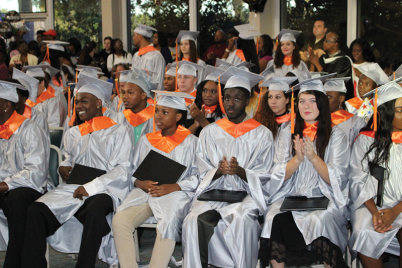