BROOKLYN, N.Y. — No one said it was going to be easy. Least of all, Keith Thurman.

In the toughest test of his career, Clearwater native Thurman fended off a determined attack from Josesito Lopez to successfully defend his WBA world welterweight title on Jan. 26 at the Barclays Center, broadcast by PBC on FOX.

Keith “One Time” Thurman knew he had to shake off the ring rust of a 22-month layoff–a break he needed to recover from injuries and surgery on his right hand. Even he admitted he would likely not be at his best after such an extended hiatus from the ring.

But Thurman (29-0, 22 KO) came out of the gate strong to challenge Lopez (36-8, 19 KO) of Riverside, Calif., looking fluid and controlling the action. The opening rounds found Lopez trying to connect with big, looping punches while Thurman, 30, looked slick as he slipped them easily.

The champ showed his quickness by firing off some good combinations and catching Lopez with a fierce left that put the challenger down in the second round. Lopez beat the count but immediately had to fight off an aggressive Thurman, who swooped in to land more punches till the bell ended the round.

The champ used his jab effectively, shooting it out and keeping Lopez back, while he carefully placed his own punches, but in the fourth Lopez got more aggressive with a series of combinations. Thurman kept his composure, despite catching a big left hand on the forehead which rocked him. Lopez managed to corner Thurman in the sixth and tried to do damage with those wild, overhand punches–even landing one in the round–but Thurman fought out of trouble.

It was the seventh round that the champ stared square in the face of defeat. Lopez, determined to come right at his target, stalked him until he found his chance to unleash a series of power-packed wallops that nearly sealed the deal.

After devastating Thurman with a huge left hook, Lopez tracked him all around the ring, connecting with many more headshots while the obviously stunned Thurman offered no offense or defense, and kept getting knocked around the ring but never off his feet. Thurman went into survival mode and simply tried to avoid disaster and his first professional loss by running and backpedaling out of Lopez’s fury.

Referee Steve Willis, keeping a close eye on the clearly-hurt Thurman, looked like he would stop the fight at any moment. But thankfully for the champ, he didn’t.

Despite a bloodied nose, the underdog challenger Lopez had taken command by dominating the round and carried all the momentum into the eighth, where he connected with more punches, including a solid straight right that snapped Thurman’s head back.

By the ninth Thurman, who had recovered from the crucible of the previous round, hung tough and even landed a big overhand right on Lopez’s chin. The challenger, still determined, answered with a big left of his own.

By the tenth Thurman had righted the ship and showed off renewed energy by slipping several punches thrown by the tiring Lopez. He continued to capitalize by jabbing and tagging Lopez with crisp shots in the 11th and then delivered a bigger payload with a bombshell uppercuts and hooks that tore through the defense of Lopez.

During the final round, Thurman, convinced he had the fight well in hand, got on his bike and backpedaled around the ring, daring Lopez to catch up him. The challenger, completely gassed by this point, could only stalk Thurman in hopes of landing a fierce knockout blow.

The action-packed championship went the distance, and Thurman was announced the winner by a majority decision. The judges’ cards scored it in favor of the champ, 113-113, 117-109 and 115-111. 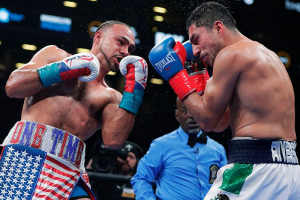 During the post-fight interview on FOX, Thurman admitted he was in trouble in that shaky seventh round.

“He got me buzzed, he got me shaken up,” he said. “I was trying to stay on the outside.”

In the interview he also conceded that he had underestimated how Lopez would really swing and commit for that knockout he wanted.

“I told everybody, ‘You’re not going to see the best Keith ‘One Time’ Thurman after 22 months, but you will see a world class performance,'” he explained, “and that’s exactly what I gave you guys tonight.”

Angela Helm, The Root For the first time in U.S. Open history, three black women have… 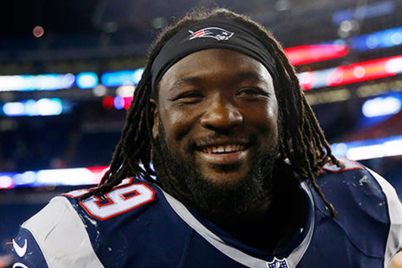 Patriots offer LeGarrette Blount a contract tender, even though they might not want him 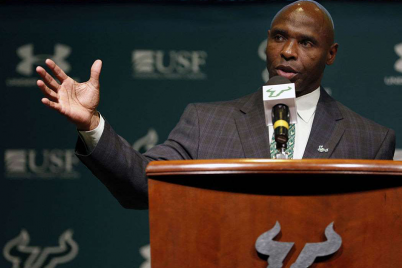 Strong urges fans to get behind USF: ‘Let’s have a top-25 fan base’