ST. PETERSBURG — As the nation waited to exhale, we took that breath George Floyd was denied. The year-long saga came to a much-anticipated end last Tuesday when a jury unanimously found former Minneapolis Police Officer Derek Chauvin guilty on all counts of unintentional second-degree murder, third-degree murder, and second-degree manslaughter.

There were so many emotions, sighs of relief, anger at what got us to this point, and hope that somehow this was progress. Accountability won, and justice was served.

Bridgette Michelle Domingos, managing attorney at Domingos Law Firm, sought out her colleagues from the legal community to share what the verdict means for them, their families, and their profession.

Attorney April Goodwin of The Goodwin Firm, PA, recalls being a freshman in college when the Rodney King trial happened. “I remember even back then being sad but not surprised at the verdict. That outcome was one of the reasons I decided to go to law school.”

Now, just shy of 29 years to the day of that verdict, she believes there is a glimmer of hope that America’s promise of justice for all may become a reality one day.

The George Floyd verdict captivated us all. In history, there is very little precedent for the conviction of a white police officer for killing a Black person, though recently, there have been a few.

While the system still has a long way to go to level the playing field, the April 20 verdict was a start.

“The Chauvin verdict signaled a racial reckoning in this country. While our hearts are full of joy due to the verdict, I am sad about those who never got this far. Breonna Taylor, Eric Garner, Michael Brown, Ahmad Arbery, and so many more are left without justice,” noted civil rights Attorney Dameka Davis of Davis Legal Center.

Attorney Lisa Knox, LM Knox Law, and Mediation, LLC, echoed the sentiments regarding the hopefulness of the conviction and the impact of a life gone much too soon. “When George Floyd was at his lowest point with a knee on his neck and calling for his mother, the world heard him!”

While Chauvin was callous to the desperate pleas for mercy, the jury made sure those cries did not go unheard – this time.

There were tears shed, prayers answered, and hope restored in this verdict. One word, GUILTY, summed up years of emotions for every person of color that has been reduced to a hashtag, a protest, or merely another life lost at the hands of those that swore to protect and serve.

The verdict signaled that every breath of life has value. It also served as a hope that all people will be able to work together, pray together, struggle together, and stand up for freedom together.

Possibly the verdict serves as a beacon light of hope that the bank of justice is not bankrupt. There still is much work to be done. But at least for one day, one moment, the verdict allows a people, a community, and the Floyd family to breathe.

Attorney Bridgette Michelle Domingos contributed her talent to this article.

A boutique firm that focuses on criminal defense, car accidents, and DUI matters, Domingos Law is one the fastest minority firms in Pinellas County. Attorney Domingos has been recognized as a SuperLawyer 2017-21, which only honors two and a half percent of all attorneys. She earned the distinction among the National Black Lawyers Top 40 Under 40. 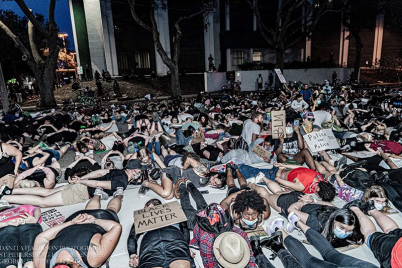 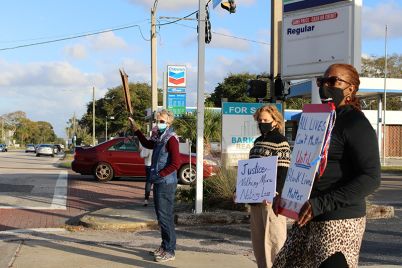