ST. PETERSBURG – The Fred G. Minnis, Sr. Bar Association, the only predominately African-American bar association in Pinellas, goal for Tuesday night’s forum was to have a productive conversation and devise solutions on how to stop the school-to-prison pipeline in Pinellas County. 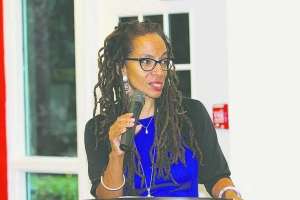 Moderating the evening was Stetson University Professor Judith Scully who informed that every four days a juvenile crashes a stolen car in Pinellas County. In 2016, there were 359 arrests for grand theft auto by juveniles, and in 2015 more were arrested in this county than in Los Angeles, 499.

With juveniles only spending a few hours in detention after being arrested for car theft, how can this problem be solved?

Judge Pierce said if a child is being arrested, “there’s a whole lot of things that have gone wrong.”

“They’ve come from broken homes, places where there’s substance abuse or mental illness. For them to make it to the courtroom, something is drastically wrong in their upbringing and homes.”

As a judge, he said, he doesn’t want to put a child in dentition unless there is a need to protect the public from harm. He would rather use alternative methods such as electronic monitoring, house arrest or evening reporting centers rather locking a child up.

Pierce said they first look to risk assessment, which is basically a score that the legislative says they must look at it to determine if a child should be detained. If the child doesn’t score at least 12 points then they will be sent home unless there is a great need for keeping them safe from the community or vice versa.

“If they do score 12 points, then I have to make the decision if this child is one that truly needs be held,” said Pierce, who feels putting a child in dentition is probably the worst thing you can do because it makes them more harden and the rate of recidivism is higher.

He feels that in order to solve some of these problems, the community must work on the issues that are causing them to commit crimes, such as family environment, substance abuse issues or mental health issues.

Rep. Newton said he debated a bill on the floor last session that would allocate 8 million dollars for funding to detain what they call “chronic juveniles” with auto theft records.

For one night, Newton said it costs $287 to hold a child in jail. He argued that it would be cheaper to put them up in a five-star hotel.

On the floor of the House, he argued for money for programs that could help turn juveniles around and change their trajectory rather than spending to lock them up.

“I think it’s really bad when you look at spending more money to lock kids up than you do to provide for scholarships and college funding.”

Newton said the penal system is an industry and “to keep this industry going, you have to pump in fresh new juveniles. The way you do that…you keep creating laws to lock these kids up so they can’t realize their full potential.”

Attorney Flannigan has a different take on the matter.

“These kids think it’s a joke,” he said. “In my opinion, I think the legislature has to do something. As far as I’m concerned, there’s got to be some available avenue to slow this down.”

Flannigan said he doesn’t think the general public is prepared to sit back and do nothing.

Dillinger said there is also a proposal to try juveniles as adults to resolve the grand theft auto crisis. He said he’s been fighting this since 1997 in the legislature.

Before the Jeb Bush era, if a state attorney wanted to put a child in the adult system, they would have to go in front of a judge.

The legislature took away the judicial part of direct file so it was solely in the hands of the state attorney. Any child over the age of 14 could be direct filed and children under the age 14 could be indicted and put into the adult system,” stated Dillinger, who said the fight is ongoing.

Dillinger said a child hits a detention facility for one day does worse than a child that has never gone.

“So think about putting a 14 year old in a state prison. I’ve seen what happens. They don’t get better.”

So what are some ways to address juvenile crime?

“If a person has no hope in life, they’re not a pleasant person to be around,” said Dillinger, who feels there needs to be a system put in place that instills that “there is a possibility of a better life than living in unsafe neighborhoods being surrounded by drugs, alcohol, domestic violence and police brutality.”

Dillinger is a huge proponent of earlier childhood education, the Pinellas Education Foundation’s Take Stock in Children program that has the highest need-base success rate of any scholarship and the Lunch Pals program where an adult volunteers one hour a week to visit a child at school and have lunch with them.

Green said she finds it laughable when the parents are automatically blamed for their children’s behavior when these parents were failed by the system when they were young.

“Then we wonder why they don’t know and have the support to raise kids in a way that we deem acceptable or appropriate.”

She said the community has abdicated accountability and responsibility for our youth as we allow police departments to spend hundreds of millions of dollars on locking up our children but won’t demand that the city or county fund 10 or 20 million dollars in programs that will actually provide structured alternatives or programs that will provide recreational activities.

As a wrestling coach at Lakewood High School, Parker said he filled the wrestling team up with young men who were getting into mischief. He even had a well-known car thief help recruit players.

With a structured program and adults who cared, the young men have all but stopped the bad behavior and continue to excel.

“If no one invests in these youths, they don’t see a lot of option but to continue to perpetuate what got them into trouble in the first place,” said Parker.

After the discussion, the panelist fielded questions from the audience. The Fred G. Minnis, Sr. Bar Association plans to hold another forum soon. 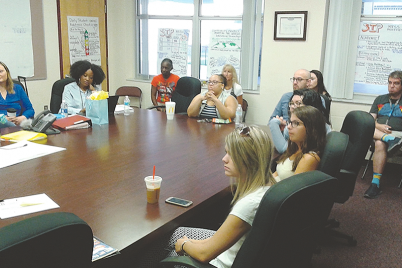 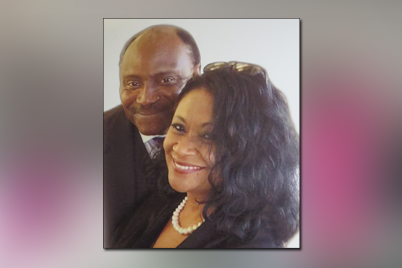 Captain of the Ship honored for 19 years of service 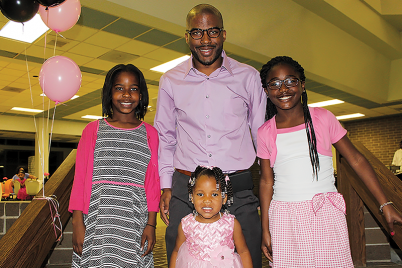 Daddy-daughter dance offers a party with a purpose