ST. PETERSBURG — In the coming weeks, life will begin to settle down for the families at Northeast High School. Existence will take on a new normal as students and staff rebound from the emotional roller coaster of the past month.

Last week, the community bid farewell to Jacquez Welch, a Northeast High football star, which brought a close to events and activities surrounding the tragic losses of two sons of Northeast and the Pinellas County community.

The outpouring has been tremendous, and the past few weeks have been exhilarating, tiresome and full of emotions for the Viking Nation and one that will forever be remembered. The media has covered every step, and the community has seen every move.

It began last month with the untimely death of Marquis Scott.

It was only fitting that Welch, one of the senior captains, present an autographed jersey signed by coaches and players to the family of Scott, a former Viking captain who lost his life three days earlier.

Scott, nicknamed Uno Tumbo, was selected as a Pinellas County All-Star in 2017.  He earned the #1 jersey at Northeast for his outstanding play.

The pregame celebration was a tribute to the contributions Scott made two years prior as a student and football player at Northeast High School. Approximately 15 minutes later, the Vikings, who hosted the Osceola Warriors, took the opening kickoff.

In his final game, Welch scampered 60 yards for a Northeast touchdown. It would be his last hooray. There wasn’t much that Scott or Welch loved more than playing football and especially for Northeast High School.

“We appreciate everything that you all have done and for being there for our family. It’s been a blessing. Just keep praying for us,” said Marquis’ father, Maress Scott while embracing his wife Marjorie.

Since Scott’s funeral last month, held at Bethel Community Baptist Church before a standing-room-only crowd, the family has had some time to privately reflect on the loss of a son while publicly watching the loss of another Viking son.

In the moment, it all seems surreal. However, the Northeast High community and his family continue to mourn his loss while reflecting on fond memories.

They will remember his participation in the Alpha Phi Alpha Fraternity Young Men Leadership program and his involvement in his church choir, youth ministry, drumline and dance/mime ministry.

He also summarized Sunday school lessons and volunteered to distribute Thanksgiving baskets. Scott was more than just a football player, which was one of the reasons why his funeral was so well attended.

“Quez was a sweet and goofy person who was very nonchalant. He was one of the people I will forever be grateful for walking into my life the way he did. He made everyone smile and everyone laugh. He was the biggest goofball anyone could meet. Quez would always say he was a popular loner. And he was right,” said one fellow classmate.

Welch will be remembered for years to come. A scholarship in his name will be awarded annually to Northeast football players who exemplify high character and a strong work ethic.

Being unselfish in life, he registered to be an organ donor. As a result, seven people are recipients of his donation to extend their life. Pinellas County Commissioners signed a proclamation declaring Oct. 7, 2019, Jacquez Welch Day.

For parents Maress, Marjorie and Marcia, community prayers will continually be needed. In the Northeast High community, these two players are forever connected as student-athletes who are part of the Viking family because, “Once a Viking, always a Viking!” 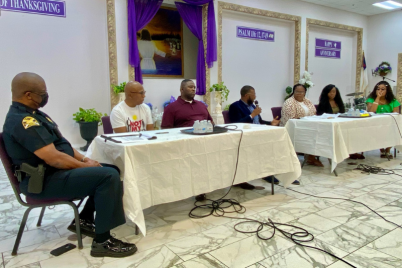 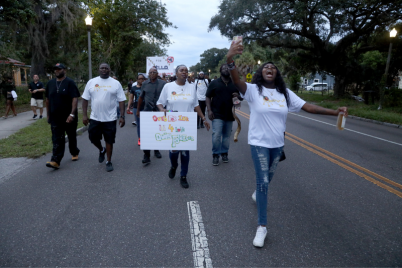 Mary Scott, right, takes the lead down 18th Avenue South during the 2nd Annual Stop the… 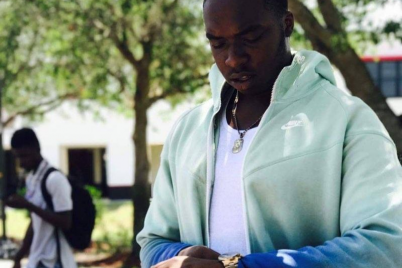 The annual Stop the Violence Walk in honor of Marquis Scott will take place Friday, Sept.…