The ‘Black Pioneers: Legacy in the American West’ exhibit now on display through Jan. 8, 2023, at The James Museum of Western & Wildlife Art. Pictured above Connie Horne, Black Miners, 2021, ©Connie Horne.

ST. PETERSBURG — When history meets art, everyone wins, and viewers of the upcoming James Museum exhibit “Black Pioneers: Legacy in the American West” are in for a memorable and moving display of both in a first-of-its-kind quilt-as-art-as-history exhibition.

The show reflects The James Museum’s mission to share the stories of the peoples, landscapes and history of the American West – this time through an examination of the contributions of African Americans to the history of the region.

In a visually creative and surprising way, the exhibit, curated by Dr. Carolyn L. Mazloomi, takes the historical journey through a pathway of 50 quilts created by the Women of Color Quilters Network (WCQN), a national nonprofit. Mazloomi, a historian and quilting artist herself, founded WCQN in 1985 with the mission to educate, preserve, exhibit, and document quilts made by African Americans.

The 50 quilts, which were commissioned and created especially for this exhibition, cover a vast terrain with their vibrant, multi-layered, sometimes three-dimensional pictures of Black sheroes and heroes, the majority of which will not be household names.

In its press release, The James Museum states, “Quilts were chosen as the visual medium for this exhibition because they function to highlight the intersections of African Americans in the Western Frontier while informing others about the art form and its important role in African-American history.” 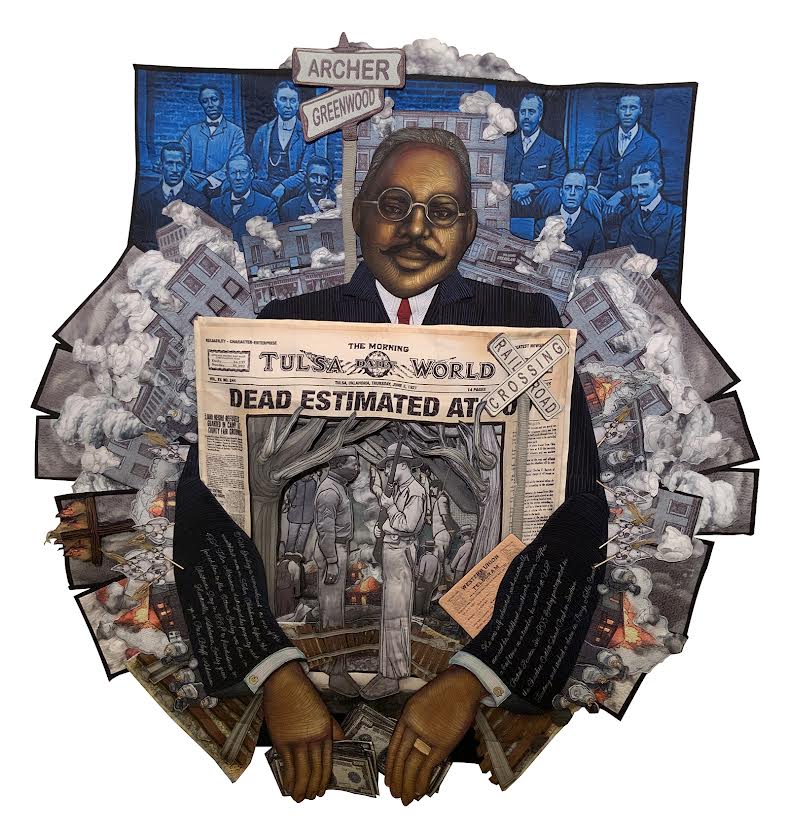 Mazloomi noted that quilts and quilt-making have an important status in America — and Black culture in particular “because the art form was historically one of the few mediums accessible to marginalized groups to tell their own story, to provide warmth for their families and to empower them with a voice through cloth.”

Viewers will be amazed at the stories and detail the quilters have woven into each piece, which cover a period spanning from the arrival of enslaved Moor Esteban de Dorantes in the 1500s up through the Watts Riots in 1965.

The artist-quilters have used mixed media techniques, incorporating photo transfers, fabric paint, a variety of fabrics, buttons, beads, tassels, twine, and embroidery to tell the stories of individuals such as Black pioneer Elijah Abel in the 1800s, the last African American to hold a role in the Mormon Church.

Other quilts tell the stories of characters such as the enslaved York, who played a vital role in the Lewis and Clark Expedition in 1803. Barney Ford, who was called “The Black Baron” of Colorado (1802 -1902), Georgia Williams, who disguised herself as a male to become a Buffalo Soldier in 1866 and Annie Box Neal, who opened a private school for children in the hotel her husband built for her in Arizona, which flourished through the 1920s.

Other quilts recognize important historical and cultural events that occurred for Blacks in the West, including the Brown vs. Board of Education of Topeka Supreme Court ruling of 1954, the Tulsa Massacre of 1921 and the evolution of West Coast Jazz in the early 1950s.

Mazloomi points out the variety of skills held by African Americans revealed in the quilts, noting the talents of Texas-born cowboy-archaeologist George McJunkin: “Nobody would believe one of the first archaeologists [in America] was an African American!”

Traveling to New Mexico at 14, McJunkin became a cowboy tutored alongside Mexican cattlemen, growing not only into a fluent translator across races but a collector and explorer. He became the first to discover a “bone pit” — later called the Folsom Site, one of North America’s most important archaeological sites. 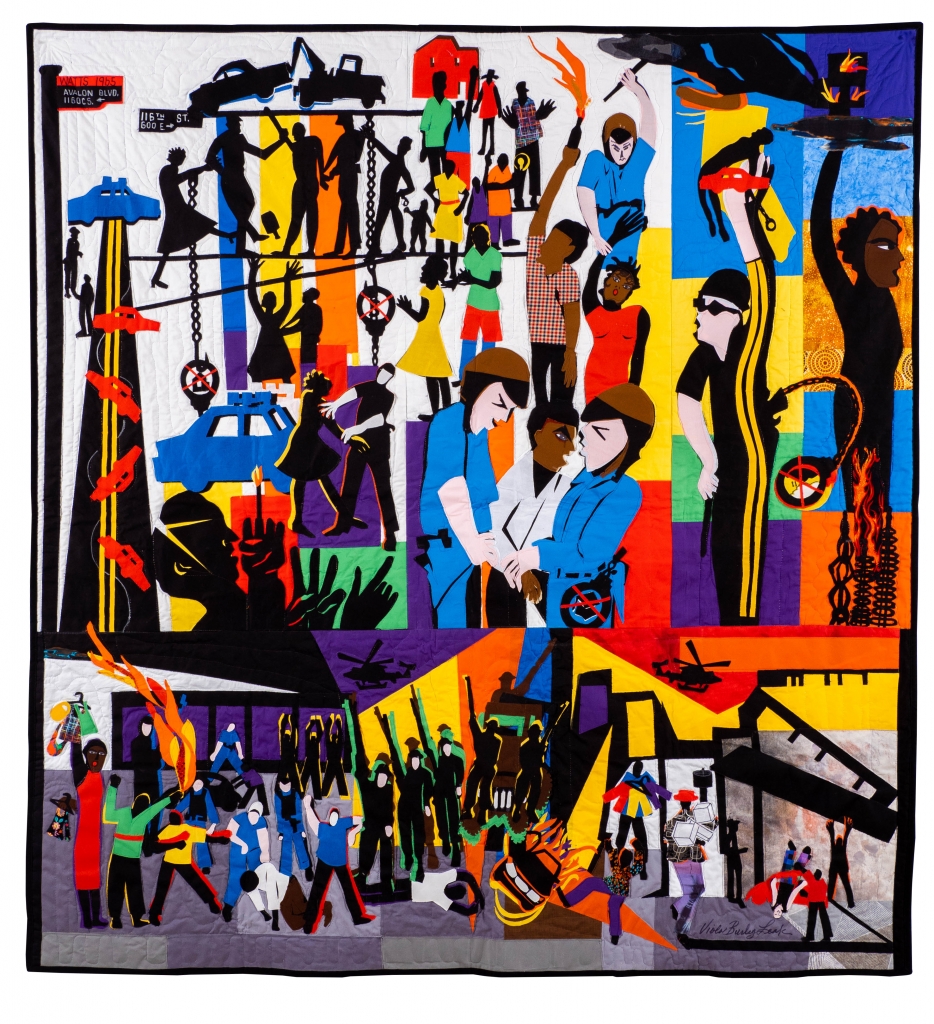 Contrasting McJunkin with the first Black filmmaker, Oscar Micheaux, who between 1919 and 1948 made more than 40 films, Mazloomi noted, “We’ve always as a people held these skills. Early African Americans may not have been degreed people with formal education, but we’ve always had the skills, as witnessed by The James exhibition. We’ve never had the acknowledgment of our skills because of racism in this country.”

Mazloomi shared that one of the highlights of the exhibition for her is telling the unknown stories people would never know about necessarily.

Discussing the socioeconomic side of the WCQN, Mazloomi noted that many of the quilters in the more than 40-year-old network made quilts as a way to make money for themselves and their families. Because it allows women to create from their homes, it has offered the quilters a means to raise their children while parenting.

“When you’re unable to go outside and work because you don’t have sitters for your children, or there’s no work in your community, you can always make and sell your quilts,” stated Mazloomi. “We’ve had programs here in the United States, we’ve had companion programs in South Africa and the Caribbean, and all of these are with women making quilts to sustain themselves and their families.”

The ‘Black Pioneers: Legacy in the American West’ exhibit now on display through Jan. 8, 2023, at The James Museum of Western & Wildlife Art. Pictured above Connie Horne, Black Miners, 2021, ©Connie Horne.

This paid editorial content was created in collaboration with The James Museum of Western & Wildlife Art. 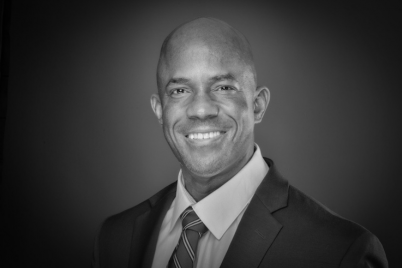 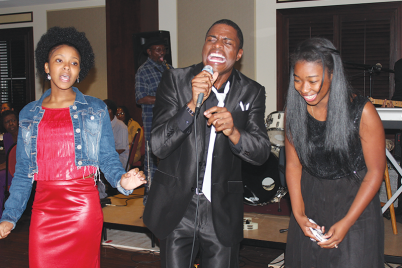 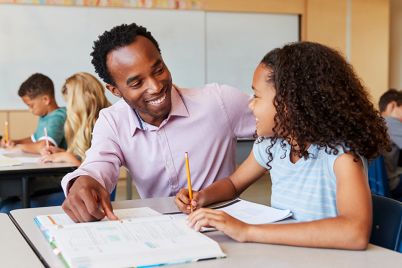 ST. PETERSBURG — The USF College of Education is launching a new initiative aimed…