CLEARWATER — EMERGE Community Economic Development Corporation was formed in 2017 by a handful of friends who spent their formative years in St. Petersburg. Brian Taylor, EMERGE’s director, said that in moving back to the area, the group decided to see how they could contribute to the community and “make a real difference.”

Taylor said the group’s initial focus was centered on youth aging out of foster care. Taylor, who was a supervisor at the Salvation Army’s Sallie House for nearly four years, noted that the issue continues to be huge. “Just seeing it firsthand, it breaks your heart,” he acknowledged.

While the group knew they wanted to provide housing for youth aging out of foster care eventually, they also realized they needed first to establish themselves in St. Pete’s housing arena.

Providence answered, said Taylor, in the form of St. Pete native Tim Howard of New Dimension Builders, LLC. After a successful building career in South Carolina, Howard returned to the area interested in bringing more affordable housing to his home city. Interested in EMERGE’s vision, Howard also wanted to incorporate his idea of affordable housing for everyone.

With family in construction, Howard started working in the business at age 14. After graduating from Lakewood High School and doing a short stint in college, he enlisted in the armed forces and served six years.

After the service, he moved to Greenville, S. C., and started his first framing company. His desire to go further propelled him to get a degree in industrial construction engineering, which helped him understand both the technical hands-on of building and site supervision, estimating, scheduling, and the specifics of coding, inspection and project management.

EMERGE and New Dimensions Builders formed a partnership to develop affordable housing. Taylor and Howard began sitting in on an initiative in St. Pete to bring nonprofits together to increase affordable housing development.

Since the City of St. Petersburg has an abundance of vacant lots on their books, they came up with the idea “to dispose of these lots through the not-for-profits and build affordable housing.”

EMERGE-New Dimension sat with 10 or 12 not-for-profits trying to develop ideas and concepts for affordable housing ideas along with the city. However, after attending the group for some time and listening to the conversations, Taylor said they realized they had something incredibly unique – a nonprofit with interests in helping the community, along with the expertise of Howard’s knowledge of the ins and outs of construction.

One of the other nonprofit organizations sitting in on the roundtables realized their combined strength was an asset — and reached out to them for help.

Taylor recounted how the 30-year-old East Tampa Business and Civic Association (ETBCA) let them know about the City of Tampa’s owner-occupied rehab program’s search for an organization to help the project run more smoothly.  New Dimensions and EMERGE partnered with ETBCA to win the proposal.

Howard ran a similar program in South Carolina and was able to retool the Tampa project and bring a new level of quality and efficiency to the initiative. With EMERGE assisting with paperwork and filing and Howard overseeing the construction, hiring the contractors, and setting standards, the ETBCA-EMERGE-New Dimensions partnership has both expanded and improved the program.

Adding new quality controls and inspection safeguards, within the first year, the number of homes rehabbed skyrocketed from less than 20 to more than 60. Currently, Howard said they’re on track to do over 90 rehabs within the fiscal year.

Taylor also added that because community investment is a central lynchpin of EMERGE’s mission and vision, they have also supported ETBCA feeding programs throughout Tampa and plan to bring that same kind of community work to all the neighborhoods they work.

Recently, news of the EMERGE-New Dimensions partnership reached Clearwater, and the team was brought in to begin building affordable homes in Clearwater.

At a recent groundbreaking, Chuck Lane, assistant director Economic Development & Housing Assistant for the City of Clearwater, expressed the city’s excitement about working on more projects with the EMERGE-New Dimensions team.

“It became pretty clear to us that this is a good group to work with,” Lane said. “They have the right agenda in mind, and they have the wherewithal to get things done.”

With projects in Tampa and Clearwater sailing along, Howard and Taylor are unhappy with the lack of engagement they have received from their hometown city, St. Pete.

So far, the City of St. Petersburg has only agreed to offer the team flood zone plots – impossible to build affordably due to the extra-cost of incurred in elevating them at least six feet above the ground. Habitat for Humanity, the city’s go-to organization, has built dozens of homes but refuses the flood zone properties.

Howard shared disappointment that the city has continued to give Habitat the best lots while sending the EMERGE-New Dimensions team down numerous “rabbit holes.” Taylor added they had also been left in the dark about savings and tax-credits they would have qualified for as a nonprofit.

(editor’s note: Habitat for Humanity’s president, Mike Sutton, reached out by email to offer clarification on the process for procuring contracts, stating that while Habitat will build on average 20 homes annually within the City of St. Petersburg, the majority of the properties are purchased on the open market in private transactions. This means, stated, Sutton, that every Habitat home being built is not linked a City-owned property. Sutton when on to share, “The City of St. Petersburg does offer a process to distribute foreclosed properties to build single-family affordable housing through the Affordable Lot Disposition Program. This is a competitive process open to for-profit developers, not-for-profit developers, or private citizens.” He added that program applications are reviewed by a committee including staff and citizens, ranked by criteria including construction experience, experience assisting homebuyers obtain financing, and anticipated completion timeframe; to ensure a variety of developers, additional points are awarded if the applicant has not received a lot within the past 12 months. Sutton maintained that the decision is left to the committee: “Although we are the only developer to have successfully placed a family since the program’s inception in late 2018 and have significant experience in the space, we were only awarded 3 of the 13 lots available in the last lot disposition cycle.”)

Howard noted that, while the city has awarded Habitat countless projects, they have not mandated that they make their houses energy efficient. He believes every municipality should make that demand on the builders they do business with.

Howard only builds BPI-certified (Building Performance Institute) “green” houses. EMERGE-New Dimensions houses are not only energy-efficient, but Taylor insists homebuyers need the education courses EMERGE offers – such as how to lower their monthly bills with cost-cutting measures.

While they wait for their hometown to become more open to “new blood” in the building sector, Taylor and Howard are undaunted. They started an initiative with Pinellas Technical College that will improve their construction and contracting related curriculum while giving the students hands-on experience.

Taylor said they continue to push homebuyer education to the communities they work in.  “We truly believe that owning a home is the beginning to long-term wealth-building, and it’s the only way that the wealth gap that everybody talks about is going to start to be filled.” 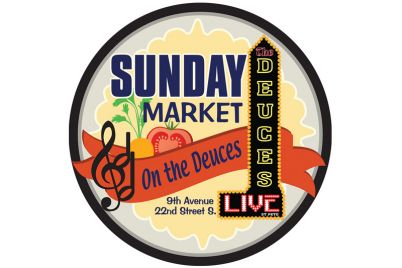 Sunday Market on The Deuces

The Deuces is Live once again! The historical 22nd Street South corridor, which featured…