The data is from the Department of Highway Safety and Motor Vehicles and shows millions of Floridians’ residential addresses. The state is mailing out 4 million postcards to Floridians “potentially eligible to vote but currently are unregistered,” according to Lee. The deadline to register is Oct 5.

This exact method of voter outreach is featured in Greg Palast’s latest book, “How Trump Stole 2020.” ERIC was founded by the Pew Charitable Trust, a liberal organization.

Part of the rationale for founding ERIC was to uncover people who are registered to vote in two states.  This can happen when one moves in an election year.  According to Palast, most of the “movers” to or from a state are “students, low-income voters and renters, Latinx and Black voters. And, most didn’t move.”

Under ERIC, the lists of movers are compiled and handed over to the 25 participating states, who happen to be mostly Republican-controlled, in order to mail out the postcards.  Pew does not follow up to see how the lists are used.

The postcards are not brightly colored and can easily be missed.  By not returning them, the recipient is effectively disenfranchised without knowing it.  According to Palast, this method has been used in Georgia, Kansas, Virginia, Michigan, and Ohio.  Only four percent of the postcards are returned.

ERIC has been denounced by Barbara Arnwine, a law professor and head of the Lawyers Committee for Civil Rights Under Law.  “ERIC should be called ERROR because it’s erroneous and full of flaws.”

In the 2018 election, ERIC admitted that 44,000 Wisconsin voters were erroneously purged.  This was twice the margin of victory for Trump in that election.

The ACLU was able to stop the use of ERIC in California using the logic that just because someone is registered in two states, that doesn’t mean they will try and vote in both states.  Anticipating a crime that doesn’t occur in the vast majority of cases should not lead to taking the voter off the rolls.

Palast has written several books on voter disenfranchisement in the U.S.  He has recommendations for  the 2020 election:

Avoid provisional ballots as they are typically not counted. 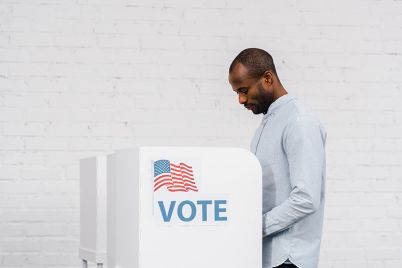