April is Minority Health Month, and Dr. Katurah Jenkins-Hall shared some of her thoughts on what she’s observing in the current mental health arena.

ST. PETERSBURG – Born and raised in St. Pete, Dr. Katurah Jenkins-Hall is a licensed clinical psychologist who has practiced in Tampa Bay for over three decades. She was the first African-American woman to be awarded a doctorate in psychology from the University of South Florida, where she taught for 30 years.

She is also an ordained pastor, serving at New Dawn Restoration Center, and is the founder of the Greater Reach Alliance of Christian Counselors and Educators (G.R.A.C.E.), through which she supports competent professionals in becoming trained in spiritually and culturally relevant mental health approaches.

Currently, Jenkins-Hall is an instructor at Eckerd College, teaching a course called Health Equity and Social Justice, which focuses on “the nature of health (bio/psycho/socio/spiritual), structural racism, gender, and religious biases, and human rights to equal resources that lead to a healthy life.”

April is Minority Health Month, and Jenkins-Hall shared some of her thoughts on what she’s observing in the current mental health arena.

Foremost on her mind is mental health stigma, which she called a deadly issue harming families across the country. She noted, “Not just for African Americans but for many BIPOC populations, there’s a cultural stigma about acknowledging mental issues versus physical issues.”

While teaching the class at Eckerd, Jenkins-Hall noted that they’ve been reviewing Latinx, Black, and Asian cultures, and she commented on the occurrence of mental health and stigma as an issue in many cultures. Pointing to the rising rate of suicide in Asian Americans, she relayed, “It’s all about the cultural taboos to respond to mental illness, and the child or the young person’s sense of shaming the entire family if they are not mentally fit.”

Stating how important it is to alleviate the stigma that keeps people in bondage and keeps people hiding problems that can be easily addressed through medicine and therapy, Jenkins-Hall said destigmatizing is necessary and includes making it as common to examine and respond to our mental health needs as our physical needs.

“If I tell you that you need an annual checkup for physical reasons, you’d say, ‘fine,’” she noted, adding that we should have the same willingness to get professional help when we’re suffering from mental a disease. Thankfully, she stated, “more and more physicians are included in some type of mental health screening in their physical examinations.”

Everything from race-related violence to political turmoil and ongoing economic inequity has caused even greater stress on Black communities in the last few years. And then, there’s the impact of COVID.

A recent study on African Americans’ risk of COVID-related PTSD (post-traumatic stress disorder) stated that among African Americans, the negative impact of the disease on our communities’ mental health “is compounded by high rates of previous trauma due to personal and family adversity. African Americans are more likely to be victims of or witness violence and to have friends or relatives who become victims of violence. They also have experienced more traumatic childhood events, and levels of current PTSD are higher than whites. Previous trauma predicts responding to a new disaster with PTSD.”

Jenkins-Hall acknowledged that “COVID has raised new conversations in certain issues, such as stress, anxiety, grief. Those issues are prominent, and people are beginning to speak out about them. In my experience clinically in practice, it’s been an increase of people who will say, ‘Yeah, I’m among those who are reaching out for help.’”

Considering how mental health is being addressed in the church, she commented that locally there has been progress in Black church leaders coming to grips with understanding more about the fact that “mental health issues are real and there are people who are trained to deal with them beyond what pastoral care trains you to do.”

Jenkins-Hall noted that both she and Dr. LaDonna Butler had done a lot of work communicating the need for professional mental health treatment to local clergy. But she also acknowledged that the stigma in the church is not tied to one community and is found throughout the church as a whole.

“Religion says that your first reliance ought to be on God and faith, and the cause of issues of any kind, at its root, is sin. There are strong counseling approaches that are designed to see your issue as some type of sin issue. And therefore, the way we got diagnose it is the way we respond to it.”

Jenkins-Hall said this leads to an attitude of “if it’s a sin issue, we pray about.” This universal church-type response is one she’d like to see change.

She said she’d also like to see more conversation separating “mental health” from “mental illness” because that will allow for a model of health that aligns with how we look at physical health.

Jenkins-Hall said this kind of “preventative” mental health care includes considering, addressing, and working towards improving the things that we can in our relationships and with our own habits before we get to the point that we’re “stressed beyond the point of being able to be to bounce back.”

Additionally, Jenkins-Hall said she would like to see mental illness destigmatized in the same way physical illness is – but maybe even more successfully. The practitioner noted that people will still judge people with physical health conditions, such as diabetes – “You got that? You aren’t even that fat!” – and says that this lacks awareness that the condition is often genetic.

She noted that judgmental and inaccurate comments and advice are even greater when it comes to mental health.

“If I say I’m depressed, people will begin to minimize that: “Girl, you need to go shopping or give yourself a bubble bath” — minimizing the disorder when it [might be] a chemical imbalance. If so, it’s probably related to the lack of serotonin in your brain and your brain’s inability to produce that in a certain amount. And there are things that I can tell you to do behaviorally that will increase your brain’s production of certain hormones.” Sometimes, Dr. Jenkins-Hall noted, “a pill works as well, as a replacement of the hormone or chemical that’s missing.”

She feels people are less trusting of medicine for mental health because they “can’t see it working; so, people think you’re messing with their head or trying to drive them crazy.” While all medicine is not suitable for every person, Jenkins-Hall noted that “antidepressants are replacing something that your brain isn’t producing at the right amount. Just like insulin, for diabetics.”

If you’d like more information on Dr. Jenkins-Hall’s work with G.R.A.C.E., Greater Reach Alliance of Christian Counselors and Educators, or to reach out for counseling, call 813-220-3148.

By Cheryl Forberg, R.D. | Eating Well One of the first foods that signals the… 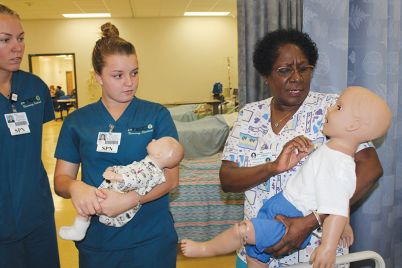 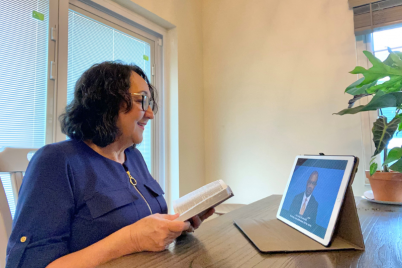 ‘In times like these, we need hope more than ever. Hope helps a person look ahead with…